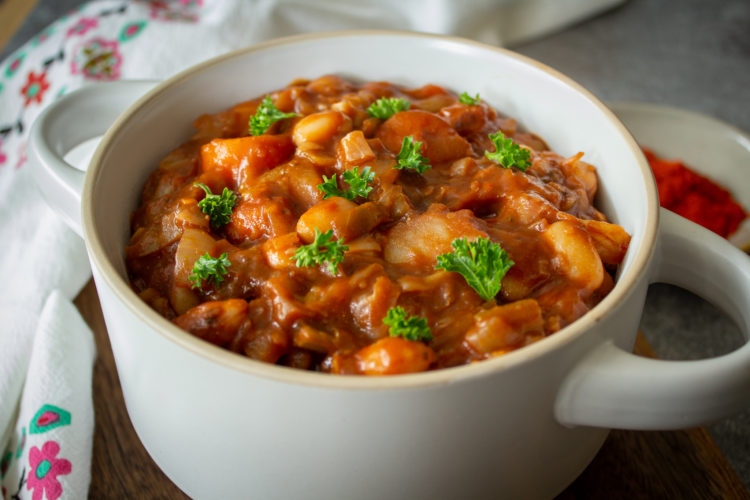 A Hungarian-style goulash that is flavourful and hearty, made vegan by the use of beans instead of the traditional meat.

I am so happy that I created this recipe – it has warmed me and my fiancé up on many a cold winter evening!

I actually got the idea, or the backbone of this recipe from someone on Facebook. I have no recollection of the name of the person, she was a stranger on a vegan group that I am in. She was also Hungarian and we got to talking about goulash (as one does haha 😝 ). She gave me a recipe which she makes regularly, which is not from a book – she recollected what she usually makes and typed it out off the top of her head, and I hastily copied and pasted into my computer ‘notes’ app.

I have since changed and refined it a fair amount, but the spice mix is mostly from the Hungarian Facebook stranger. I feel it is pretty authentic!

(I hope I am not offending any Hungarians if this is not what you would consider traditional fare!) 🙈 🤣

This is also a dish I strongly associate with my grandmother who was Austrian. She often made goulash, if my childhood memory serves me, and it often had sliced cabbage in it, as well as smoked sausage of some kind. In fact, these were ingredients she used very often, and I think are quite typically European.

I think my grandmother would approve of my recipe 100%, although she would probably moan due to the lack of sausage! 😆

The origins of the Hungarian goulash date as far back as the 9th century, when it was created by shepherds/herdsmen who would dry the meat and other ingredients in the sun and carry it with them in bags on their journeys, only adding water to reconstitute it as needed. (Sounds to me like Hungarian shepherds were the original inventors of the modern Cup-a-Soup, am I right?!). The traditional paprika flavour which today epitomises the dish, was only added in the 18th century when it became widely available in that part of the world. ( source: https://www.britannica.com/topic/goulash).

In the original recipe I came upon and adapted, soya chunks were used to replace the chunks of meat that would traditionally go into a goulash. That is probably still my favourite way to make it, and I will definitely include a recipe for that variation, as well as for instructions on how to make this in a pressure cooker/Instant Pot at a later stage. The reason I wanted to publish a bean goulash first is that I am aware a lot of people prefer to avoid soya. The soya debate is a longstanding one, but most feared negative effects of soya have been debunked by science, although these myths still prevail.

The ingredients in this vegan bean goulash which create the flavours that are so unique to the dish, are also so typically European – loads of onion which cooks down to nothing but a fragrant and flavourful sauce, the green cabbage, caraway seeds, lots of garlic, and of course lots of paprika. Combined with chunky carrots, and cooked but still firm-to-the-bite beans, this dish is incredibly:

It can also be made gluten free by using corn flour for thickening instead of the Bisto or flour, and omitting the soya sauce and adding a bit more salt to compensate. It can be made completely fat-free if you use vegetable stock powder instead of the vegan beef stock cube, which contains oils, albeit tiny amounts, and don’t garnish with coconut cream.

A vegan Hungarian-style goulash, made with beans, cabbage, potatoes, and paprika to create a satisfying and healthy dinner dish.