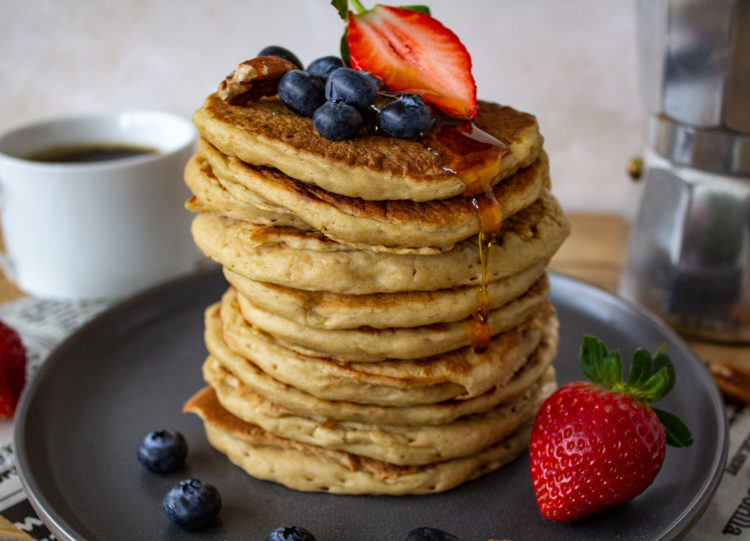 Soft and fluffy pancakes that are higher in protein for a balanced and delicious breakfast or post-workout snack.

I have been on an urgent search over the last while to find a great vegan pancake recipe.

I wanted something that was very similar to the pancakes I grew up eating, and later making myself, which contained egg and dairy etc.

I grew up calling these flapjacks or crumpets. In Australia, I think flapjacks are something more like the South African ‘crunchie’. In my household, pancakes were the name we gave to a thin, french-style crepe. I find the various names interesting, albeit confusing!

In the U.S though, these are simply called pancakes, and so this is what I have come to call them. As it has been something I have been searching for on Google over the last few years, I very quickly came to learn that Googling flapjacks or crumpets did not lead me to what I was looking for at all.

So – I shall call these pancakes, and thin pancakes I will call crepes. Problem solved.

I eventually had an idea for a pancake that I hoped would be fluffy and soft like I wanted it to be. On the other hand – for me personally, I was quite aware that regular pancakes are very high in refined carbohydrates and nutritionally devoid of much else. To make these more balanced I decided to try and incorporate some of my vegan protein powder into the mix and see if it would not change the texture too much. To my delight it didn’t, and I had just discovered a perfect vegan protein pancake recipe!

I also tried to keep the fat content down, and so this recipe does make for a more balanced breakfast than regular pancakes would.

According to the MyFitnessPal app which tracks calories and macronutrients of food, one of these pancakes (without add-ins) is roughly 57 calories, which means, if you made the whole recipe, which serves 2, and had half (one serving) you would be eating 340 calories, which would include around 15g protein.

Really not a bad inclusion for an occasional breakfast, or a post-workout snack!

My favourite add-ins are chocolate chips though, so not the healthiest, but it could be worse.

I love to eat these with fresh fruit, drizzled with nut butters and golden syrup, and coconut yoghurt if I happen to have. Yum!

If you prefer visuals, watch my video here or click on the video on this page below the recipe card.

Soft and fluffy pancakes that you won’t believe are vegan. Higher in protein for a balanced breakfast or post-workout snack.