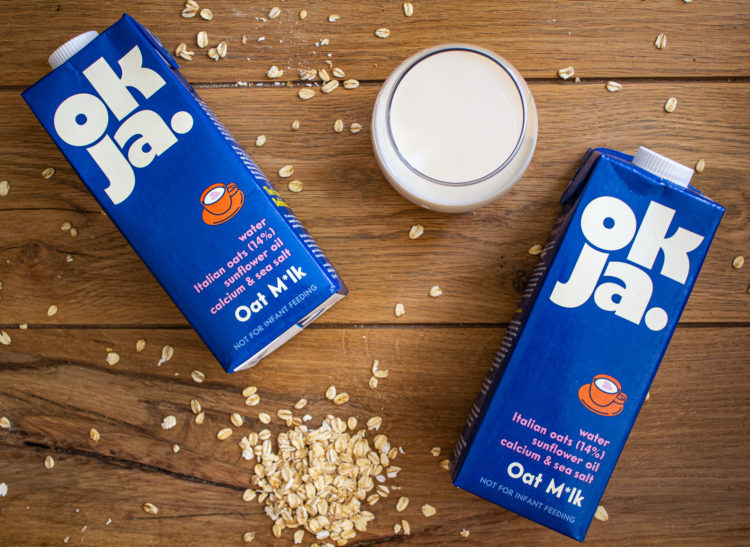 “milk is not necessary for humans after weaning and the nutrients it contains are readily available in foods without animal protein, saturated fat, and cholesterol”

Honestly, I have been waiting for an oat milk to hit our shores.

Liaising with virtual vegan friends on social media, it is quite obvious that South Africa has quite a way to go as far as commercially available vegan food goes. I have picked up the fact that the range of plant-based milks available, particularly in the UK and the US (seems to be where most of the online vegans I see reside) is way more vast than ours.

It turned out that my friend who shared the article was the very person who designed this striking branding! Job very well done. 👌🏼

Imagine my excitement when I realised the product thats branding caught my eye in such a way, was in fact for oat milk!

Long story short, I got my hands on a couple of boxes of this rarity to try it, and decided to do a review of it incase anyone was as excited about it as I was. 😆

This post is not sponsored or subsidized as a promotion in any way, it is my honest opinion of a new and exciting product on the market. Hopefully there will be more where this came from!

Onto the tasty, tasty part …

I was honestly delighted by how neutral the flavour of this oat milk is compared to soya milk, for example, or almond milk.

It has a creamy, ‘milky’ mouthfeel, a slight natural sweetness, and a very unobtrusive and delicate flavour, which is only very slightly reminiscent of oats.

Now, the beauty of this milk is that it was actually developed for use in coffee and hot beverages, and it really shines here. I know many vegans or vegan-curious people who want to go plant-based struggle with the milk aspect, especially from a flavour perspective, and especially in coffee or tea. In my opinion, this is the most neutral plant-based milk I have tasted in coffee/tea!

It froths beautifully for cappuccino’s!

I made espresso coffee with my stovetop moka pot and used my trusty french press to froth the m*lk (using the Okja m*lk spelling 😉).

To do this I simply warmed the oat milk, put it in my french press, and pumped the plunger filter up and down rapidly to foam up the milk. This is probably a barista’s worst nightmare, but without any specialised equipment, it does just fine (sorry if this is sacrilegious in coffee snob circles)!

It created a beautiful, tiny-bubbled froth which tasted great in our espresso.

Now for my rating …

Overall Review : Go out and get some and give it a try!

I have a feeling this will get a thumbs up from anyone who dislikes the taste of soya or almond milk due to their strength in taste.

Also, I cannot wait to try this in a frothy hot chocolate! It is even kind of making me look forward to winter, a little …

If you taste this I would love to know your thoughts in the comment section.