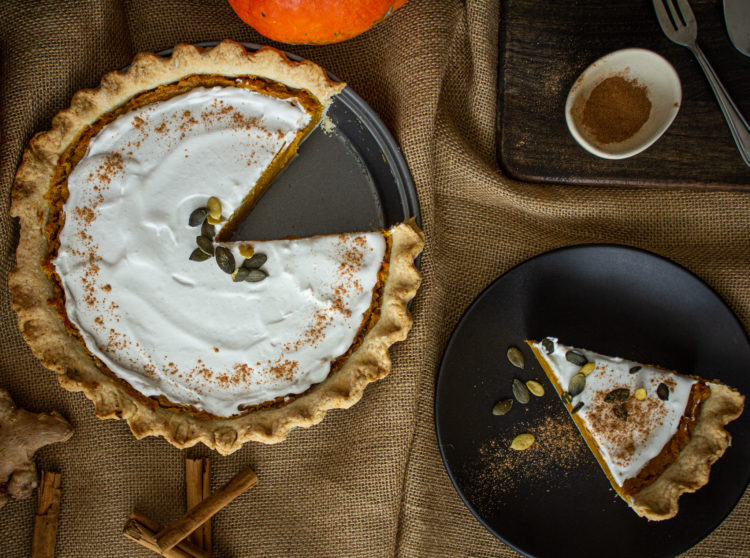 A rich, spicy, and creamy vegan pumpkin pie recipe with a flaky coconut oil pastry crust … perfect for Halloween, and what better way to get your daily serving of veggies in?

Dairy-free and egg-free, but flavour-full!

I had never really known what pumpkin pie was like.

It is not a hugely popular or particularly traditional dish in South Africa. Sweet potato pie, that is probably a thing here (I should check on that) – but pumpkin pie, upon hearing the words, I think of the good ol’ U.S of A.

The first time I ever had pumpkin pie I must have been a teenager, and if memory serves, it was probably around Halloween.

Halloween and trick-or-treating were also not a thing here. Mine was probably the first generation to start with it, and judging from the reactions we got all those years ago, at least 50% of people who opened their doors to us had no clue what Halloween even was, let alone our chants of ‘trick-or-treat’!

One Halloween my dad decided he was going to make a pumpkin pie. He booted up the old dial-up internet on our big chunk of desktop computer, and searched for a recipe. I should really ask him if he still has it! It was not vegan, but I would love to try and veganize it.

It was sweet, spicy and smooth, with a golden pastry, and a sweetened sour cream topping which sat thickly on top. My mind was officially blown.

As I grew a bit older, Halloween just became a good excuse to have a party. I love loved dress-up parties!

Now being the ripe old age of 33, I don’t trick-or-treat anymore (boo), and *I certainly don’t party anymore.

Now for Halloween I make pumpkin pie, and take photographs of my black cat, Gobbolino. Of course I will add a picture of him at the bottom of this post, because he is the best thing since sliced bread. Or pumpkin pie.

I have spent quite a lot of time experimenting with this vegan recipe, and as much as I love pumpkin pie, to be honest, I don’t want to see another one for a very long time! Our little household of two (ok, three) has had at least one pumpkin pie a week for the last 4 weeks or so! 🐽

In America it seems you can buy pumpkin puree in a tin. This would be super convenient, but I have never seen it in a shop here in South Africa.

You are going to have to cook and puree your own pumpkin, which is a bit laborious, but oh so worth it! Here are some instructions that may help.

In South Africa we also can’t purchase ready-made pumpkin pie spice, since, as mentioned earlier, pumpkin pie is not really a thing here. Maybe you can, but I have never seen it.

Luckily I found a great recipe for the spice mix. I love these flavours so much, I plan to mix up a whole lot and keep it in a jar, and just put it in everything. I imagine it will go so well in things like oats, smoothies, muffins, pancakes etc.

Enjoy the warming, spicy flavours of this creamy plant-based pumpkin pie, which is set in a flaky coconut oil shortcrust pastry.

And now for the grand finale …

Happy Halloween from Gobbolino and I!