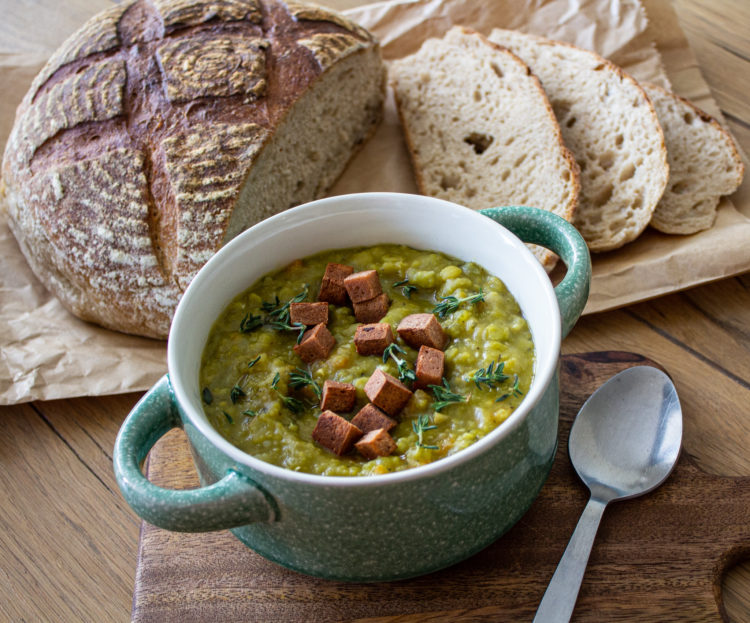 An easy vegan pea soup recipe that is thick, hearty, smoky and ridiculously satisfying. It is also fat-free and high in protein, and makes a perfect winter warming meal.

The flavour of this recipe really reminds me of my moms pea soup recipe. It makes me super nostalgic, and reminds me of winter nights growing up and still in my parents home. I may be biased but I really like it!

I realised the signature flavour that differentiated my moms soup from others I had tasted was the addition of a subtle smokiness, which she achieved with the use of smoked ham bones.

Pigs are far too cute to use in soup, so I figured I needed to learn how to make a classic but easy vegan split pea soup to make in my own home. I created this recipe using an ingredient that gives it the same soft smoky flavour as the traditional recipe but without any harm done.

The secret ingredient is liquid smoke. If you haven’t heard of liquid smoke, take note! This is a really beautiful pantry staple for any kitchen!

What is liquid smoke? Basically it is liquid collected from the condensation of smoke. Here is an explanation that made a lot of sense to me. It is from this blog post here on Food52, which quotes a brand called Wright’s Liquid Smoke:

‘It is made from hickory, applewood or mesquite wood that is burned inside a chamber. As the smoke rises it is captured in a condenser and it cools. The cooled smoke forms water droplets (condensation). These droplets are then collected and filtered twice.‘

How awesome is that? Who needs smoked meats to get that beautiful umami flavour into foods right?!

The brand I use is called Lazy Kettle Hickory Liquid Smoke and is easily available here on the Woolworths online store, or in the shop.

Ham with no harm?

In addition to the liquid smoke, I decided to re-create the ‘chopped ham chunk’ texture using Fry’s polony sausage, which, just in general, is quite a favourite of ours. It is also child-approved – my two nephews could not get enough of it, I had to keep a close eye on it when we used it on our vegan pizzas when they came over for a pizza night (pizza recipe coming soon)! It is also great in vegan macaroni cheese (this recipe coming soon too).

You could also use the Fry’s original hot dogs – I haven’t tried this, but I’m sure it would make a great substitute as it also has that great smoky flavour.

This can be made in a pressure cooker/Instant Pot or in a regular pot on the stove.

Since I got my pressure cooker I honestly don’t know what I did without it! Anyone who eats lots of dried pulses/legumes/beans – this is a great investment. Also, I imagine for busy people with children a pressure cooker would be great as it conveniently does all the cooking for you without having to supervise pots and stir etc. Just chop everything, put it in the pressure cooker, turn it on, and leave. It will cook to perfection, release the steam when done, and then keep the food warm, all while you do the other important things that need to be done.

I bought this brand online, at a very reasonable price, and it is proving to be a great tool in my kitchen. I use it weekly for soups, stews and goulash (recipe to come), I cook chickpeas, beans, legumes and pulses in it – no soaking required! I have also made the most amazing oatmeal and steel-cut oats in it before which made the most delicious winter breakfast, as well as soya milk yoghurt, as it has a yoghurt setting as well.

I have to mention that drool-worthy loaf of bread…

The best artisan bread I have ever had, hands down, comes from a tiny and little-known bakery in an unassuming one-way street in Muizenberg (Cape Town, South Africa).

The Real Bread Company can be found in Killarney Road, a tiny shop which is easy to miss, they supply wholesale to many local restaurants – I’m quite sure I have had their bread in some of the trendy side-walk café’s and restaurants along the Kalk Bay strip just down the road (check out where it features on this Forbes list – I must get cool points for this).

They use their own sourdough ferments, and pure ingredients – these loaves look as beautifully rustic as they taste. To go with this soup I bought the Campagna loaf, which is so delicious I love to eat it as is, or with some Flora vegan margarine. Bread and butter – sometimes the simple things in life, done well, are the most beautiful!

Get to the shop early before lunch time, as they sell out quickly.

Now for the recipe!

A hearty and satisfying green split pea soup recipe that is warming and delicious, as well as nutritious and easy on the pocket!