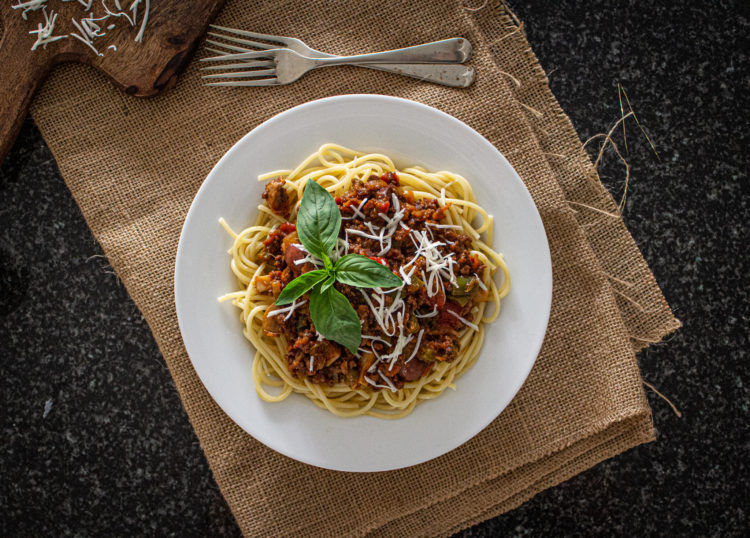 A beautiful fusion of Mediterranean flavours combine in this classic spaghetti bolognese recipe, which is simmered slowly to mellow its flavours and create the ultimate vegan comfort meal.

One of my all-time favourite weeknight meals has always been spaghetti bolognese, both when I used to eat meat, and now as a vegan.

This is because I have mastered the plant-based spaghetti bolognese sauce! It has taken a while of experimentation, but I feel like I have a pretty good recipe created now.

When I was new to plant-based eating, one of the first problems I ran into was how to make spaghetti bolognese without mince? I tried making lentil bolognese sauce, which is great, but doesn’t quite cut it if you are looking for a texture that is very similar to ground beef mince meat.

I am really glad that I discovered soya mince (also known as TVP – Texturised Vegetable Protein) early on, because, in my opinion, it is the best mince meat analogue I have found. It is made from soya beans, is very cheap, it soaks up flavours very well, is high in protein with no fat, and has a texture very similar to mince!

There are various different kinds of soya mince – the one that I have used for this recipe is a plain, dry soya mince granules.

There is a different soya mince that is sold in most grocery stores in the dry food sections, near the dry pasta’s etc. You find it in a box, and it is usually flavoured. If you look at the ingredients on these boxes, you will find that, while it does have its place as a convenient and quick food, it is not very pure. It has lots of additives such as starch thickeners, added fat and sugar, as well as flavour enhancers.

I buy plain soya mince granules from Atlas Foods in Bo-Kaap, Cape Town, but you can also find the Nature’s Choice or Health Connection brands, as well as this brand, all from Dischem, and most large grocery retailers.

They are also available in chunks, which work amazingly as a substitute for anything that would have utilized chunks of beef or meat – think pepper ‘steak’ pie, stews, or a killer Hungarian-style goulash which I have been known to make with them (recipe to come soon)!

In the meanwhile, please do try your hand at this meatless spaghetti bolognese and let me know how you find it!